Congratulations to our 2022 Award Winners!

​The Trailblazer Award is given to someone who is truly a visionary for Texas theatre. This educator is setting new ground and raising the standards for educational theatre in many different aspects. Alexis Gette has been involved in the theatre since she was a child. She was always a nerdy observer of all things "performance" and "education," and obviously when you put those two things together, you get a theatre teacher!  She holds a BFA degree in Theatre, with an emphasis in Acting and Direction, and a Masters degree in Theatre Performance.She migrated to Houston 6 years ago, and loves everything about living there, except Hurricane season! Alexis has taken the reins of the Texas Thespian Junior Festivals and expanded the vision in multiple regional festivals. Alexis embodies the very heart of a Trailblazer for initiative, creativity, and providing opportunity to our middle school theatre students all across Texas.

Administrator of the Year ~ Travis Springfield
Travis Springfield currently serves as the Assistant Director of Fine Arts for Theatre and Dance at Fort Bend ISD where he coordinates and supports over 70 theatre and dance teachers at 28 campuses.  He majored in theatre at Texas State University graduating in 1991 with a BFA in Acting. Travis taught theatre for 9 years with Bishop ISD, Humble ISD, and Klein ISD. During his teaching career, he received numerous awards for directing including a UIL One Act Play State Championship and 2 additional UIL One Act State appearances. Mr. Springfield completed his Masters of Counseling degree in 2003 and has worked at Kingwood HS and Atascocita HS as counselor and lead counselor.  In 2008 he joined Houston ISD as Manager of Theatre eventually serving as the Director of UIL Academics coordinating competitive music, theatre, speech, debate and academic activities for over 100 K-12 campuses.  He was later recruited to become the lead counselor and Dean of Students at Houston’s High School for the Performing and Visual Arts (HSPVA) where he worked for 9 years before joining the fine arts team at FBISD.

​After leaving the classroom, Travis continued work in educational theatre having served on the State UIL Advisory Committee, as the founding Chair of the One Act Play Adjudicators Organization- TTAO and on the Board of Directors for the national Arts School Network organization. He currently serves on the Board of Directors for the Texas Educational Theatre Association (TxETA) as President-Elect.  Travis is a respected and sought after UIL One Act Play judge and clinician working with 70-80 high school productions annually and has been invited to judge the state contest six times. In addition, Travis is an Adjunct Professor for the University of Houston Theatre Department’s summer master’s program for theatre educators and has served as a respondent for the Houston Shakespeare Festival Summer Conservatory.  His work in theatre in Houston includes appearances with Scriptwriter’s Houston, Unhinged Productions, Mildred's Umbrella and The Country Playhouse.

The Golden Apple ~ Beth Auble
In high school, Beth Auble was taking pictures for the school yearbook of the upcoming performance of “West Side Story,” when she was bitten by the theatre bug. She joined the crew for the One Act that year and never looked back!
Auble left the small town of Waller, Texas and headed to Utah where she earned her BA in Theatre Studies. While there she learned of her love and passion of costumes.
Under the guidance of Erin Moore, she took her first teaching job at Stratford High School. From there, she joined Moore in Sealy, becoming the first ever theatre teacher for Sealy Jr High.
After six years, Beth took a year off from teaching to become a costumer at Legoland California. Missing the life and passion of middle school theatre students, she moved back to Texas where she taught at Wiley Middle School in Leander. While there, she received the Educator of the Year award from the Texas Educational Theatre Association in 2016.
After five years of coaching cheer and building a successful theatre program, Auble took a position with Industrial ISD where she could teach both Jr High and High School theatre. Auble recently graduated from Texas A&M Commerce with her masters in Theatre and now adds dual credit theatre courses to her thriving theatre program. 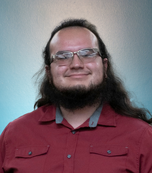 The Green Apple ~ Matt Smith
Matt Smith is the in his second year of teaching as the Technical Theatre director at Mesquite High School (Troupe 562) in Mesquite, TX. His journey to this position began In San Antonio at John Jay Science & Engineering Academy with his directors Nora Moreno Jarrell and Morgan Gardiner who encouraged him to pursue studying and creating theatre after high school. Matt Smith went on to earn a degree in Theatre Design & Technology from Baylor University. After graduating in the pandemic, he lept into education accepting the Tech Theatre Director position at Mesquite High School to make an impact with on the next generation of theatre makers.

Recent acclaims include having 6 National Qualifying Students including one for Stage Management. As a new teacher he was recognize by his district as "THE Mesquite High School First Class Teacher of the Year."

In addition to teaching, he has worked with DFW Area theatres such as Genesis Children's Theatre and Prism Theatre. He has brought in students to work on sets and attend the performances to give them more exposure to theatre outside of the classroom.